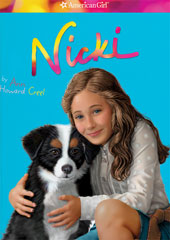 Nicki Fleming is a natural with animals. When the chance to train a service dog comes up, she just can’t say "No," even if it means taking on more responsibility and having to give up some of the things she loves doing. When Sprocket the puppy turns out to be a handful, it takes all Nicki’s compassion to keep on with his training. She knows that one day Sprocket will make someone else’s life better—and that makes all the difference.

After dinner I helped Mom with the dishes while Dad went back outside to settle the animals for the night. I went out to help him when the dishes were done. Some of the sows, the female pigs, were getting ready to farrow, which means to give birth, and I had to help Dad get the farrowing house ready. It has to be separate from the other pigs and cleaned with boiling-hot lye solution, followed by a boiling rinse. Then we put down fresh, clean bedding.

He said to me as we worked, "Lots of piglets coming this year." He smiled.

I tried to smile back. "Great."

After we finished with the pigs, I decided to put Sprocket on his gentle leader and take him for a walk. The gentle leader was not always the gentlest thing to get on. I had to get the noseband on first and then the neckband, and then clip it in place, making sure it wasn’t too tight. To my surprise, Sprocket just sat there, smiling and letting me do it.

Mom told me to say, "Dress" whenever I did this, and eventually Sprocket would learn to stretch out his neck and point his nose, making it easier for us. She also explained that the gentle leader is sort of like a horse’s bridle. It’s designed to gently discourage a dog from pulling on a leash with his shoulders and neck, but it doesn’t hurt him.

Outside, the stars were glittering chips of light against the black sky. The ranch, the meadows, the pastures, and the huge, huge sky were beautiful on nights like this.

Sprocket, however, wasn’t interested in the night sky. He wanted to head for the pigs, but I knew better than to allow that. I led him out toward the pastures instead, but once we got beyond the barn he started speeding up, sniffing the ground like crazy. There are always lots of night creatures in our pastures-field mice, gophers, raccoons, and skunks, to name a few-and Sprocket must have smelled each and every one of them. But he was supposed to be paying attention to me.

I tried to control him like I was supposed to. I kept repeating, "Sprocket, watch me," but he wouldn’t listen. Oh, what were some of those other commands in the manuals? "Sit" didn’t work. My other commands didn’t even faze him. He just kept trying to pull, even with the gentle leader. If he could’ve, he would have dragged me along the ground behind him-and he was much stronger that I expected.

I heard a hawk cry out overhead and then, in addition to pulling and straining, Sprocket started shaking and barking. Boy, was his bark loud!

Woof, woof, woof. Over and over.

I thought I was supposed to say, "Quiet," so I tried that, but I couldn’t get him to stop.

Finally I said, "Shut up!" I couldn’t help myself.

Sprocket kept barking and pulling. I kept telling him to hush and be still, but he wouldn’t listen to me. I looked back toward the rectangles of yellow light that were the windows of our house.

Girls of the Year